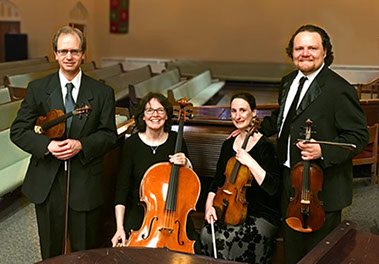 Genaro Medina began studying music and the violin in his native country, Venezuela, under world-famous orchestral music program phenomenon “El Sistema.” He completed conservatory studies with honors under the guidance of violin Professor Eugene Weiss. His orchestral career started at age 15, when he became a member of the first violin section of the Carabobo State Symphony Orchestra. He also became a member of The Ibero-American Orchestra, touring throughout the Americas. He gave solo recitals in various cities and performed as soloist with symphony orchestras, including the Valencia Youth Orchestra, the Carabobo Symphony Orchestra and the San Carlos Symphony. He earned bachelor’s and master’s degrees from Duquesne University and performed with the Pennsylvania Philharmonic Orchestra, the Lancaster Symphony Orchestra, the Duquesne University Symphony Orchestra and chamber orchestras in Europe and the United States.

A native of Ohio, Jeremy Klapper studied violin performance at the Cleveland Institute of Music, Ohio State University, Aspen Music Festival and Meadowmount School of Music. His teachers include David Cerone, Michael Davis, Kurt Sassmannshaus, Yair Kless, Aaron Rosand, and Edward Lawrence. He is a former member of the Florida Symphony and the Houston Symphony, and participated in concert tours of Europe and Asia with the latter ensemble. More recently he has appeared in solo and chamber music recitals across the US and in Germany, and currently plays with the Altoona Symphony. Dr. Klapper is also a graduate of the University of Cincinnati College of Medicine, and is a practicing pathologist at UPMC Altoona.

Violinist and violist Lela Tsinadze has enjoyed a prolific music career in the US and abroad as a performer and a pedagogue. Lela has performed with The Tbilisi State Symphony Orchestra in the Republic of Georgia, The Baton Rouge Symphony, The Pensacola Symphony Orchestra in Florida, The Saint Louis New Opera Orchestra in Missouri, the Lancaster Symphony Orchestra, The Philadelphia Pops Orchestra and Philadelphia Virtuosi Chamber Orchestra. Ms. Tsinadze is the assistant concertmaster of the Altoona Symphony.   Lela holds a Bachelor’s degree from the Tbilisi Conservatory in the Republic of Georgia and a Masters degree in both violin and viola from the Louisiana State University. She has won concerto competitions in the Republic of Georgia and in the United States.  In addition, she currently teaches strings at a studio she maintains with her husband, Genaro Medina.

Cellist Kim Cook has performed as a soloist in Europe, Russia, China, Israel, Jordan, Latin America and throughout the United States. As International Artistic Ambassador for the U.S. State Department, she toured extensively.  She has recorded concertos by Shostakovich, Tchaikovsky, Dvorak, Lalo, Saint-Saëns and Haydn, solo sonatas of Kodaly, Crumb, and Hindemith, and works by Paul Reale for NAXOS. Cook has degrees from Yale and the University of Illinois, and has worked with Gabriel Magyar, Alan Harris and Aldo Parisot.  At Penn State, she was awarded the Faculty Scholar Medal, served as the inaugural Penn State Laureate, and is Distinguished Professor of Music.

The Allegheny String Quartet has performed  on the Sunderman Memorial Concert Series at  Trinity Lutheran in Altoona, and on the Unitarian Universalist Fellowship Music Series in State College, PA 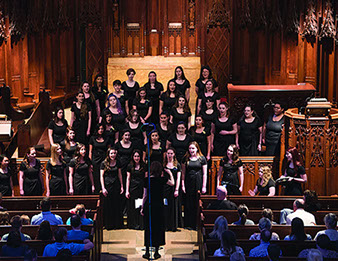 Founded in 1927, the University of Pittsburgh Women's Choral Ensemble is open to all women of the University community, including undergraduates, graduate students, and staff. The ensemble sings the National Anthem for the Pitt women's soccer team home games, participates in the Women's Choir Festival in Western Pennsylvania, and performs each semester on campus. The members rehearse three hours per week and receive one college credit each semester for their participation. The group performs repertory ranging from traditional sacred and secular classics to international folk songs, popular music, and show tunes. The ensemble can be frequently heard performing the National Anthem at Women's Volleyball games, Men's Soccer, Baseball, Softball, Wrestling, and Swimming in addition to Women's soccer games. Auditions are held each fall. 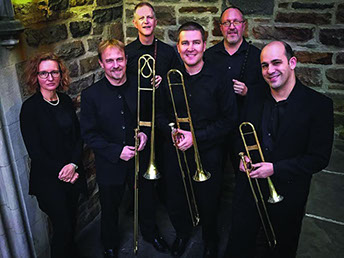 Considered one of the premiere ensembles of its kind in North America, the Washington Cornett and Sackbutt Ensemble (WCSE), directed by Michael Holmes, consists of historic brass instrument specialists based in Washington DC. Assemblages of cornetts (curved hybrid brass/woodwind instruments) and sackbuts (early trombones) comprised what was the standard brass ensemble of the late Renaissance and early Baroque eras of Western music.

WCSE’s membership has modified and grown considerably since its inception in 1997, performing extensively and in high demand in the Eastern U.S. with some of the more prominent historic vocal and instrumental groups in the American early music community. Its repertoire is vast, exploring nearly every possible style, period and region where early brass sources were represented, including music from the Italian, German, Polish, Bohemian, Moravian, Scandinavian, Spanish, and English courts, as well as the Americas. In the summer of 2001, WCSE produced its first recording of music by Giovanni Gabrieli and Heinrich Schütz.  In August 2003, they were invited to be the featured ensemble at the Historic Brass Society Festival at Yale University (New Haven, CT). WCSE was also featured in the 2004 CD recording Mass in Honor of the Immaculate Conception in music by Monteverdi, Gabrieli, Frescobaldi, Marenzio, and Ugolini, in collaboration with the choir of the National Shrine of the Immaculate Conception in Washington D.C. Another one of their recordings of a canzona by Claudio Merulo circulated widely to numerous North American universities in 2005 as part of the anthology for Craig Wright and Brian Simms’s music history textbook Music in Western Civilization.

WCSE performed at the 2015 Boston Early Music Festival and more recently was the featured ensemble for the Washington Bach Consort’s Christmas with the Consort in December 2016. The ensemble continues to provide their unique, mellifluous, and historically informed sound for numerous choirs who want to enrich their programming through the glorious forgotten practice of colla parte (“doubling the choral parts”) or providing Stadtpfeiffer (“town piper”) fanfares and flourishes for ceremonial occasions. WCSE has received much critical acclaim since its inception. 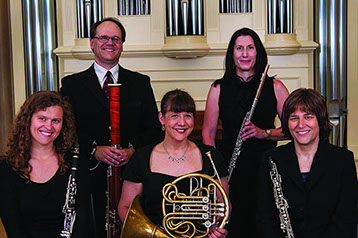 The IUP Faculty Woodwind Quintet is comprised of full time faculty artists and teachers found within the IUP Department of Music.  In addition to their annual recitals on the campus of IUP, the quintet has been invited to perform at multiple meetings of the Pennsylvania Music Educators Association, the National Association for Music Education All Eastern Conference, and most recently, a tour of Moscow and St. Petersburg, Russia where they gave multiple performances and master classes at such venues such as the Moscow Conservatory and the Rimsky Korsakov Conservatory.  Dedicated to the mission of music education, the Quintet regularly performs in schools all through the northeastern United States, providing high quality performances for school age children of all ages.  The members of the quintet are:  Dr. Therese Wacker, flute; Dr. Stephanie Caulder, oboe; Dr. Rosemary Engelstad, clarinet; Dr. Heidi Lucas, horn; and Dr. Jason Worzbyt, bassoon.

Bryan Lohr is a native of Stoystown, Pennsylvania, whose early studies on the piano and organ began with Dr. Randall Fagan in Somerset, PA, and continued at Shadyside Presbyterian Church in Pittsburgh with Jason Kissel and John Walker. Bryan holds an undergraduate degree from the Julliard School in New York City, where he studied with John Weaver and the Grammy Award-winning Paul Jacobs.  Bryan also studied harpsichord with Lionel Party and improvisation with Gerry Hancock.  Earning a master of music degree from Carnegie Mellon University in Pittsburgh where he studied with Donald Wilkins, Bryan also became the first organist to receive the prestigious and highly selective Artist Diploma from Carnegie Mellon.

While living as a student in New York, Bryan served for three years as organist and director of music at Manhattan’s First Church of Religious Science, then meeting each week at Lincoln Center’s Alice Tully Hall.  A strong advocate of excellence and diversity in sacred music, Bryan has served on the board of directors of the United Church of Christ Musician’s National Network and was a performer for the unprecedented recording of the entire New Century Hymnal, released by the Pilgrim Press of Cleveland, OH.  Bryan has served as a workshop presenter and guest speaker for various church music gatherings sponsored by the United Church of Christ and the American Guild of Organists. Bryan served as organist for the 29th and 30th General Synods of the United Church of Christ, held respectively in Long Beach, CA and Cleveland, performing for audiences of more than 5,000.

As both a pianist and organist, Bryan has played numerous concerts and recitals across the United States, appearing in venues sponsored by the American Guild of Organists, the Central Pennsylvania Festival of the Arts, and some of America’s most prominent recital series. He has also appeared on several occasions as organist with the Johnstown Symphony Orchestra, the Chamber Orchestra of the Alleghenies, and the Bach Choir of Pittsburgh.

Bryan currently serves as the Director of Music Ministries at First Presbyterian Church of Cumberland, MD, where he leads a dynamic music program.

Aside from music, Bryan is active as a leader in numerous charities and civic organizations throughout western Pennsylvania.

For more information on Bryan and his upcoming performances, visit BryanLohr.com 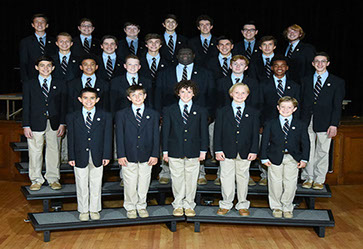 Now celebrating its 33rd season, The Maryland State Boychoir, under the direction of Stephen A. Holmes, serves the State of Maryland as its "Official Goodwill Ambassadors.”  The Boychoir performs 100 times annually throughout Maryland and on national/international tours that have taken them to 35 states and fourteen countries. The choristers have sung at many distinguished venues, including The White House, National Cathedral, St. Patrick's Cathedral in New York City, and the Kimmel Center for the Performing Arts in Philadelphia. Recent Boychoir musical programs have included performances of Wagner’s The Flying Dutchman with Baltimore Concert Opera, the premiere of Monster in the Maze with Baltimore Choral Arts at Kraushaar Auditorium,  American Choral Directors Association’s national conference  in Salt Lake City, UT, The Polar Express with the Baltimore Symphony Orchestra, Puccini’s Tosca at the Modell Lyric Opera House, Beethoven’s Ninth Symphony with the Bach Concert Series, and Leonard Bernstein’s Kaddish at both The Meyerhoff Symphony Hall and Strathmore Center for the Performing Arts with the Baltimore Symphony Orchestra. The Boychoir’s annual Festival of Nine Lessons and Carols sells out three performances each December. Other memorable performances include a tribute to Dr. Martin Luther King with the Washington Choral Arts Society at the Kennedy Center, the Twentieth Annual Baltimore Boychoir Festival directed by Dr. Sandra Snow, and singing for the Opening Ceremony at the PGA Presidents Cup with Presidents George H. W. Bush and William Clinton in attendance. The Boychoir has also collaborated with renowned international ensembles, including Bonifantes from the Czech Republic and the Drakensberg Boy’s Choir of South Africa.